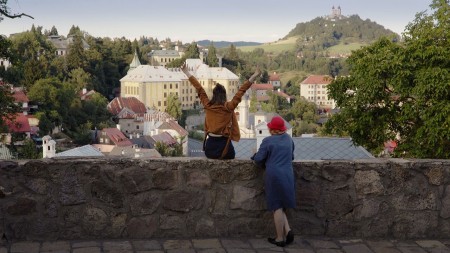 The 20th edition of the popular Summer Film Festival 4 Elements will take place in Banská Štiavnica from August 8 till August 12, 2018. Movie theaters, open air theaters, the Old Castle, but also local cafés and clubs will become the refuges of film lovers who feel like watching a selection of the best movies dedicated to the theme HAPPY END and enjoying several accompanying events.

“The choice of the theme is not accidental. 4 Elements are ending the second decade of their existence and are still able to find space for development and growth. For us, the organizers, the very existence of the 20th edition will be a small celebration of all our efforts, a sort of a happy end. As it happens in films, a happy ending does not mean the end of everything and we believe that the story of 4 Elements will happily continue,” explains the choice of this year’s theme Daniela Chlapíková, the executive director of the event.

The collection of films is a result of the events’ well-tested tactics to bring together films with older production date and the newer ones as well as live-action, documentary, animated and experimental films. The theme HAPPY END will be represented by films with a positive ending, but also those that deal with the ending of time periods, eras or stages of life. Hollywood classics such as It’s a Wonderful Life (Frank Capra, 1946) or The Apartment (Billy Wilder, 1963) will be joined by recent festival hits Western (Valeska Grisebach, 2017) or The Garbage Helicopter (Sophelikoptern, Jonas Selberg Augustsén, 2015). At a special test screening, 4 Elements will introduce to the Slovak audience a new film by director Phillip Eichholtz Away You Go (Rückenwind von vorn, 2018). The German creator partially filmed the movie in Banská Štiavnica after the town had caught his interest when he was attending the winter edition of the film festival.

4 Elements is a playful event that connects cinematography with other artistic areas and actively engages its visitors. This year, besides the traditional screening at the 4 courtyards of the Old Castle in Banská Štiavnica with live musical accompaniment there will be also an interactive film screening that the audience themselves can bring to a potential happy ending. Apart from the film program, the festival will offer to its guests many accompanying events that include concerts, parties, exhibitions, installations, discussions and lectures.

An important part of the event is 4 Elements for Kids, a program for the youngest participants but also their parents. It will offer a thematic selection of family movies, one of them with live simultaneous dubbing. The creators of the animated series The Websters (2017) will prepare for the kids two creative workshops – the art workshop will be open for public and limited only but the space capacity, the animation workshop will introduce children who sign up in advance to the basics of film animation. Children will create their own spider characters of the Webster family who will become the protagonists of a short film which will premiere after the end of the workshop.